Just updated to this version, didn't test bluetooth, though, but "oaimng" still got the same problems, so I think, I will, too.

While I went through the settings after factory reset, I found this one in LED Notification: "Fräulein Anrufe"... you did translate "missed" to german as "Miss", like addressing an unmarried woman. This should be "Verpasste Anrufe" or simply "Anrufe", since in english theres also only "calls", not "missed calls".

Also "Klangverstörung" in sounds, I don't know, why the sound should be "disturbed" or "distressed", my Doogee also got that bad translation. Maybe you meant something like "Klangverbesserung", since english "enhancement" means "Verbesserung".

Some other things are only available in english, like the confirmation when I want to shutdown the phone.

//edit
I continued testing: YES, the bluetooth stutters are still there, but no disconnects so far. It sounds like something makes the player pause the song and resumes after half a second, because I have a fade-in, when music resumes.

Another issue I can confirm is the contrast reducing or gamma value change , when in bright light: This can easily be seen, if you set the display brightness lower than 50%. If it is set higher, you will barely see the rise in brightness, but instead the change in contrast or gamma in an instant. If you set display brightness to a lower value, like 20-30%, you will see that the image gets brighter with the backlight, and then the colors are changing. I've made a video of that, if needed.

I also can confirm that the proximity sensor doesn't reach far enough and is unrealiable. I, too, did things on the touchscreen with my cheek while talking to someone on the phone. Using it with my right hand on my right ear.

Just a question: Why can't I switch between apps with a long press on the home-button any more? I found out by myself, that I have to tap the menu/list-button twice to see the recently used apps.

Well, and there're more not so useful translations: "Anwendung der vernetzten Steuerung" (english: Network access control), which would better be called "Netzwerkzugriff verwalten" and inside this menu I found "Daten verschieben" (Mobile Network), better use "Mobile Daten" here. Also, same menu, the button on the bottom line, left: "Öffne alle" (curiously enough, this is also called "open all" in english). Why? You used "Alle deaktivieren" (deactivate all) on the right button, why don't you label the left one "Alle aktivieren"?
Last edited by dhamokk on Fri Oct 20, 2017 7:14 am, edited 8 times in total.
Top

When will the .zip file be available for this update ?
Top

hello the problem of pink color instead of red color for front camera is always here!!!!!!!
A friend received a bv8000pro and the problem is the same ! could you confirm everybody here this phone has the problem ! thanks
Top

"Disable absolute Volume" dont stay on in developer menu. At 20170822 firmware it was working.
Top 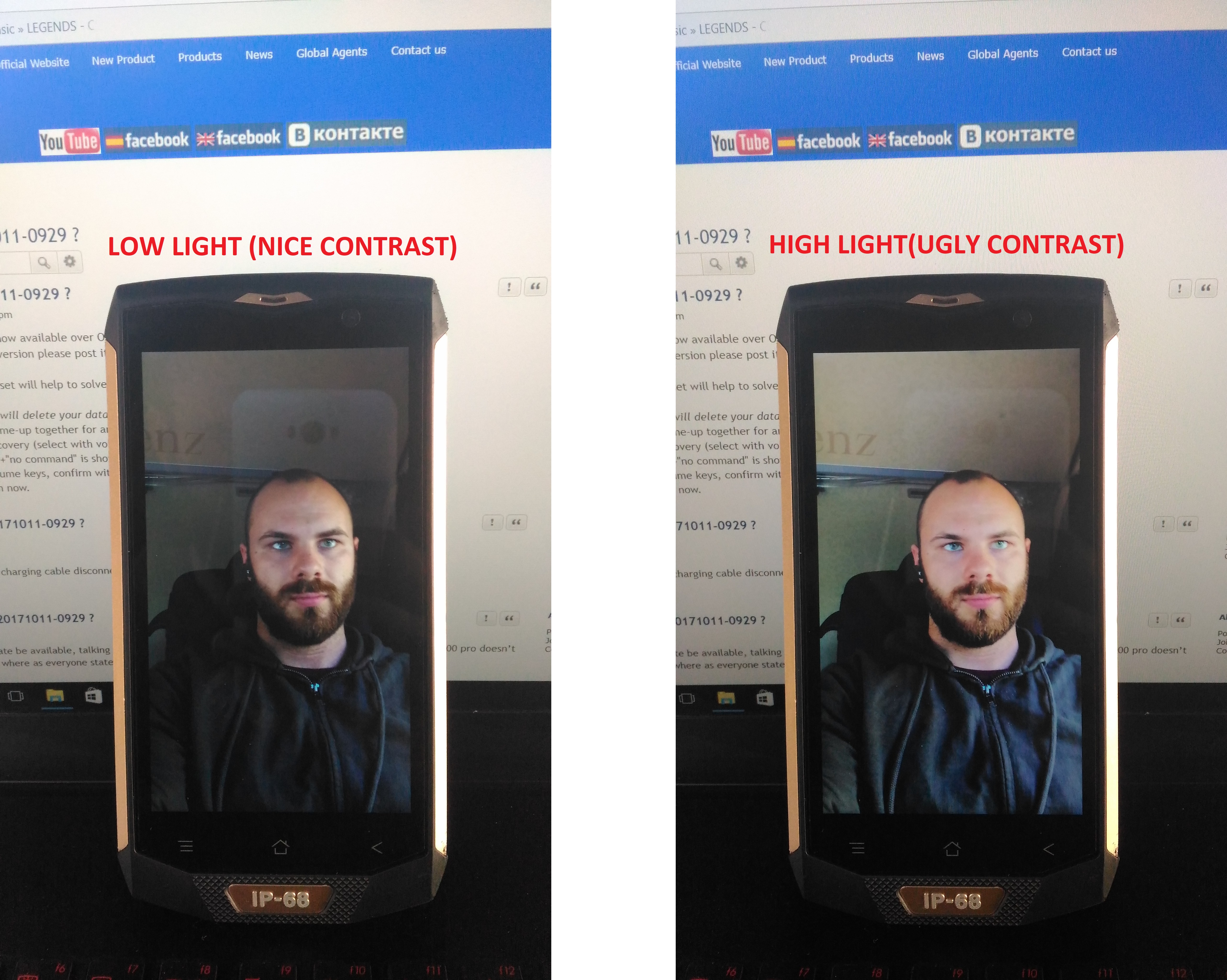 (this is the same photo on bv8000, but if you direct a light to the screen(flashlight, sun light, etc, you get the ugly effect on the right)

An option to deactivate contrast change would be nice
Bluetooth call fix would be great
ptt, sos button deactivation or the option to set any other app/command for that button
Back button to work properly would be nice

auto-adjustment of illumination and contrast can be disabled in the engineering menu (turn off the AAL function) and reboot the device!
Attention! it will not affect the automatic brightness adjustment
Top

Can you make the update files available ?
I don't care about OTA, I need to be able to manually flash the ROM. This is a huge problem for this version.
Top

For those with contrast issue here is a video how to solve it: https://youtu.be/BbWr35f1714

Thank you Aeron for the info.
Top

Users browsing this forum: No registered users and 2 guests
×